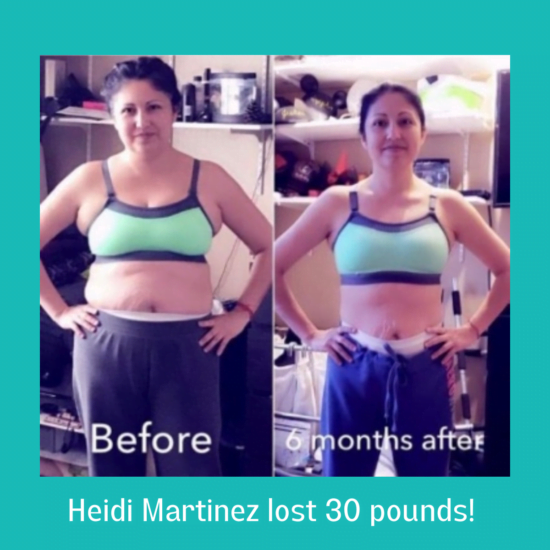 Meet Heidi Martinez! Mother of 5 who lost 30 pounds through our MD Diet program!

Tell me about yourself?

My name is Heidi Martinez. I’m 43 years old. I have 5 children. I’ve had all kinds of different jobs, but I work from home now. I come from a very big family. I have family all over the US and Mexico. Both my parents come from big families of 11 to 12 kids each, so you can imagine how many cousins I had. We were all very family-oriented and did everything together.

Why did you decide you wanted to lose weight?

I decided to lose weight because I started worrying about my health. After every kid that I had, I noticed that I kept on some weight. After my fifth baby, I was told that I had gestational diabetes. I was told, “If I didn’t take care of myself I could potentially end up with type 2 diabetes.” I’ve seen this in my family and I didn’t want that at all. I started to feel swollen and my legs would get tired a lot. I felt like my body was not able to carry the weight that I had. I’ve never been that heavy before. For someone as small-boned as me, I think it was a little too much so I started to get scared.

Before MD Diet, I tried to lose weight on my own. I was 164 and lost 3 pounds. It was so hard to lose those 3 pounds. I saw a friend of mine lose a bunch of weight. After I ran into her I thought, “I wonder what she did?” So I asked. When she told me about MD Diet I was like, “Wow! Really? Well if it worked for her it’s got to work for me.” And it did!

How much weight did you lose?

When I arrived at MD Diet I was 161. I dropped about 30 pounds and got down to 130. I fluctuate between 130 and 131 pounds. It was much easier to lose weight at MD Diet compared to on my own. I didn’t even have to exercise with MD Diet. All I had to do was maybe walk a little.

What has your experience been with the diet program and MD Diet?

Everything that is done and the way that it is done at MD Diet helps because it’s not just one diet for everyone. There were many different ones. I did the high protein diet and it worked. I thought it would be a long time before I could lose weight. I thought it might even be a year or more. But I was amazed to find out it was more like 4 and a half months for me. When I was doing the diet, my body wasn’t craving all of the crazy stuff that it used to crave, even though it did during other diets. My body didn’t feel jittery or anything like that, so that was really good for me. I can’t think of any opposition I had with my weight loss journey.

Have you ever tried other diets or weight loss plans before and if so, how did that go?

Yeah, I have tried other diets in the past. I’ve done the Jenny Craig diet before and didn’t really see much of a difference. I bought all the food for their plan and I think I spent more money there compared to MD Diet. I’ve tried gyms and personal trainers. I did see body tone improvement while I was there, but not to the amount where I wanted to be and I definitely did not get rid of some of the fat I had in areas where I wanted to lose it. With MD Diet, I was able to lose fat more evenly and around the areas that I wanted to.

What did you think of the products at MD Diet?

All of the products were yummy, so that helped! We had some of the soups, pancakes, protein water, and shakes. Even my kids and my husband liked the products. Some of the things from the clinic like the protein drinks and the shakes were so good that my kids and husband would steal the food from me! Usually, people don’t like diet products, but we did. When we would go out on walks, I would carry the protein water, and if I had the mango flavor or the grape flavor with me my kids would say, “Do you have some of that special water mom?!” The snacks and everything were inexpensive. If you completely change the way you eat and apply some of these foods into your daily life, then you’ll save money.

What did you think about the staff at MD Diet?

They were Wonderful! I think that the staff at MD Diet helped me a lot. Having to come in once a week to weigh myself and get my vitamin shots really helped because I felt like I was making a difference every time I saw the scale and would see all of my BMI and everything change. Whoever was giving me my shots was amazing because I couldn’t feel anything. They were very knowledgeable because whenever I had a question, anyone there could answer it. I really liked that! And the staff remembers me!

What have your family and friends said about your weight loss?

I went to a dinner for some workshops I’d taken in the past. It’d been a couple of months since I’d seen anybody there, and when I got there everyone was staring at me and was like, “Wow! What did you do?!” They were trying to not make me feel uncomfortable like, “Oh my gosh! You used to be fat.” because nobody really says those things, right? But I could just notice that people were looking at me and I thought, “Oh wow! They notice something!” And it really was noticeable. The sizes that I was wearing were different. None of my previous clothes fit anymore because they were falling off of my body. I was excited because I was able to buy more clothing and that was really fun. People noticed and would start asking me what happened to my weight. I would start to show some of my close friends my before and after photos and they were amazed!

How did losing weight positively affect your life?

Losing weight I think did affect my life in a positive way. Before, all I wanted to do was sit somewhere and watch my kids from afar as they would play. I would tell myself that it was because of my age, but It really wasn’t just because of my age. I didn’t feel right, I felt heavy, and I was tired. Even if I wasn’t huge, it was big enough to put me in that state. Now, I feel better about myself! For one, I don’t feel heavy and swollen every morning anymore. I don’t feel so tired. I am able to do a lot more than I used to. I have more energy and I want to play with my kids. I can actually run around like a kid in the park with them.

If someone called and asked, “Why should I go to MD Diet, what would you tell them?”

If someone asks me why they should go to MD Diet I would say, because it works. It’s not outrageous, it’s not like other diets. They have the right stuff and they know how to help you. I think that MD Diet is really trying to build something, to fit not just one person, but to fit anybody. If you are really willing to put in the work, and when I say work It’s not that you have to struggle like in other diets and deprive yourself. No, if you are committed to following through with it, stick to it, and you do all of the things suggested as far as some of the food, then it works!